11th January, the date has a tale of heroism, a tale of raw courage and a tale which is to be remembered for ages. It was the dark night of 11th January, 1948 which witnessed the sublime courage and supreme sacrifices made by the 36 soldiers of 2 Bihar Regiment.  These brave hearts laid down their lives while protecting a train of refugees coming from West Pakistan into India at at Gujarat Railway Station in Pakistan. 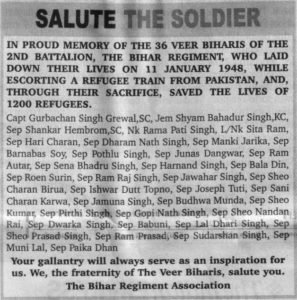 The horror, misery and gloom was still prevalent in the atmosphere as partition had been ordered few months back, and refugees were still transiting from India to Pakistan and vice versa.

A company of 2 Bihar Regiment under the command of Captain Gurbachan Singh Grewal was tasked to escort a train from Pakistan to India. The train was full of Punjabi refugees who had left all their belongings, lost their family members and were totally helpless and ravaged. At the same time, the provisional government of Pakistan had given free hands to the armed goons to loot the refugees, rape their women and kill them in order to create an atmosphere of fear. The had used these very tricks in Bengal during “Direct Action Day” and later during “Operation Searchlight” in Bangladesh, in 1971.

On the night of 11th and 12th January, 1948, Charlie Company of the battalion were escorting the refugee train which was plying from Mari Indus to Amritsar. As soon as the train stopped near Gujrat Railway Station at midnight, the train was stopped and attacked by more than 2000 Armed Pathans.

In the words of Col Apji Randhir Singh, MEO- Lahore, the horrifying tale was narrated in a letter written by him –

“Yesterday, I spent most of my day with the survivors of the refugee train attacked at Gujrat on the night of 11/12 Jan 1948. Your escort apparently held a crowd of about 2000 Pakistani (they were all Pathan Mercenaries bought from NWFP for large scale arson and killings- Same group of Pathans were later moved to Jammu and Kashmir as additional reinforcement of Operation Gulmarg) at bay for more than six hours and did not allow even a single refugee to be harmed. By 0730hrs, they ran out of ammunition and no Pakistani Military came for help (Pakistan did not sent its military despite of the fact that they had two battalions in Gujrat itself), the train was swarmed by the mob (all armed and supported by Pakistan Muslim League leaders as well as Pakistan Army). Many were ruthlessly butchered and cut to pieces and all the property was looted (Several women were also abducted by the tribal Pathans).”

This day reminds us the saga of sacrifice and utter courage these soldiers of 2 Bihar Regiment wrote with their blood. If we look back and see what we lost to the partition, the bloods of many soldiers like them went unnoticed,  reminds us how they become pawns and how they sacrificed their lives to satisty the power lust of political ambitions.