The propaganda industry in India have focused on 3 major narratives over the past 6 years. 1. Lynchistan 2. Fascist 3. Rapistan First two failed. This thread analyses and exposes the third lie with facts.

The propaganda is neither a novel concept nor a tool of new have focused on three major narratives over the past 6 years.

First two failed because they lacked individual appeal to people. Lynches were too few and sporadic. Fascism is a sponsored topdown concept which people could not relate to in their day-to-day lives. This article analyses and exposes the third lie with published facts.

A few years ago I was to meet a western woman who requested for an informal coffee meet instead the usual formal meeting. After buying me a coffee, with compassion and empathy in her voice this woman said to me “I am sorry about the situation in India. I know being woman, you don’t feel safe anymore…”

Being someone obsessed with truth, I smiled at the opportunity to crush a vicious propaganda. I said “thank you. Please save your condescension and try to keep yourself safe because women are 13 times less safe in your country than in mine” Showed her some concrete data of rate per 100,000 and conviction rates in both countries and watched a sunset of colours on her face. This was neither the first incident not the last. The propaganda machinery is on overdrive in western countries when it comes to showing India in poor light.

All this happened post Narendra Modi’s win in 2014. Travel advices/ warnings were issued to travellers to India by many countries. It appeared that everyone truly believed that India was no longer a safe country for women. No one seemed to stop and factcheck.

How true is this image of rapes in India? Is it right to call our country Rapistan? Here I challenge this threadbare propaganda. This propaganda has three levels:

Let’s first dismantle the “women are not safe in Modi’s India” narrative. For this, we will need to consider four criteria.

1. Comparison of Rape in India before and during Modi era shows with crystal clear clarity of rapes soaring under Congress. Graph below shows a relentless rise in rape numbers during Congress rule all the way running up to 2014. The FIRST EVER drop happened after Modi took office in 2014. Spike in 2016 is in line with global trends. 2. Rate of rape per 100,000 compared across – Congress and BJP regimes. Again, BJP fares far better than Congress. The rise of rape during Congress rule is despite the fact that population growth had receding trend over the entire period. 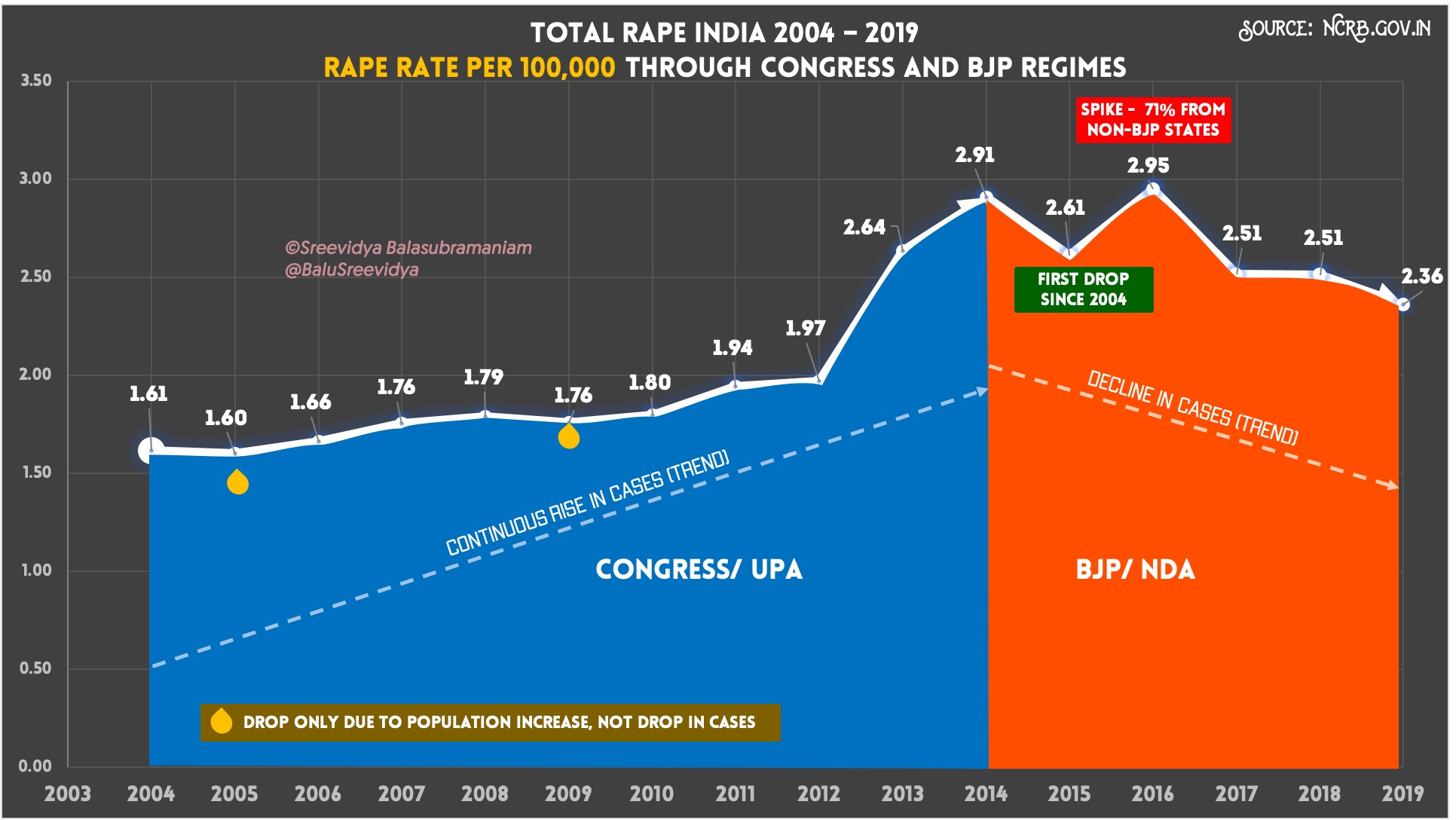 3. The propagandists knew that absolute numbers and rate per 100,000 will not hold ground as truth seekers will rip them apart. So, what did the leftist mouthpieces and fake news portals find? “A woman is raped every 15 mins in India” propaganda. As is the case so far, we will see how true this propaganda is. The chart below shows the frequency of rapes in India between 2004 – 2019. 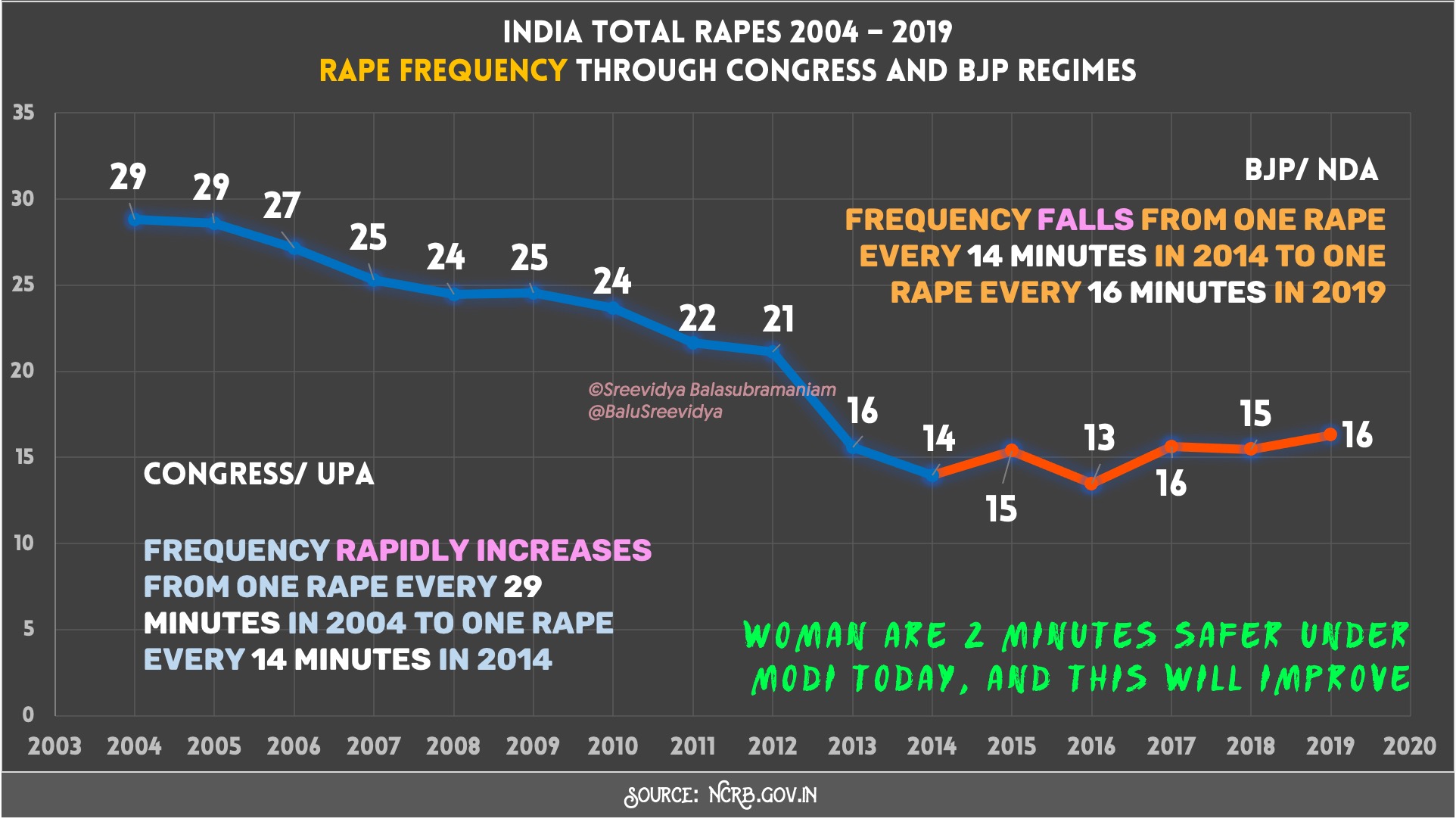 The graph tells the story. When Congress took over in 2004, every 29 mins a woman was raped. In the ten years of Congress rule, this frequency doubled to one rape in every 14 minutes, or more than two women were raped in the same time by 2014.

Since 2014, this frequency is stalled to one rape in every 16 minutes. This means that women are 2 more minutes safer under Modi than under Congress today. Given the trend under Congress rule, it’s possible that once in every 10 minutes a woman would be raped in India now if they were still ruling.

Thank God they are not in power now.

Now, having established the first three propaganda lies wrong, let’s look at the trends of the country as well as key states. Trend line is consistent with the world trend. As a country, there is distinctive difference before and after 2014. Except West Bengal, all states had rising rape rates until 2014, and mixed or abnormal rises and falls post that year. 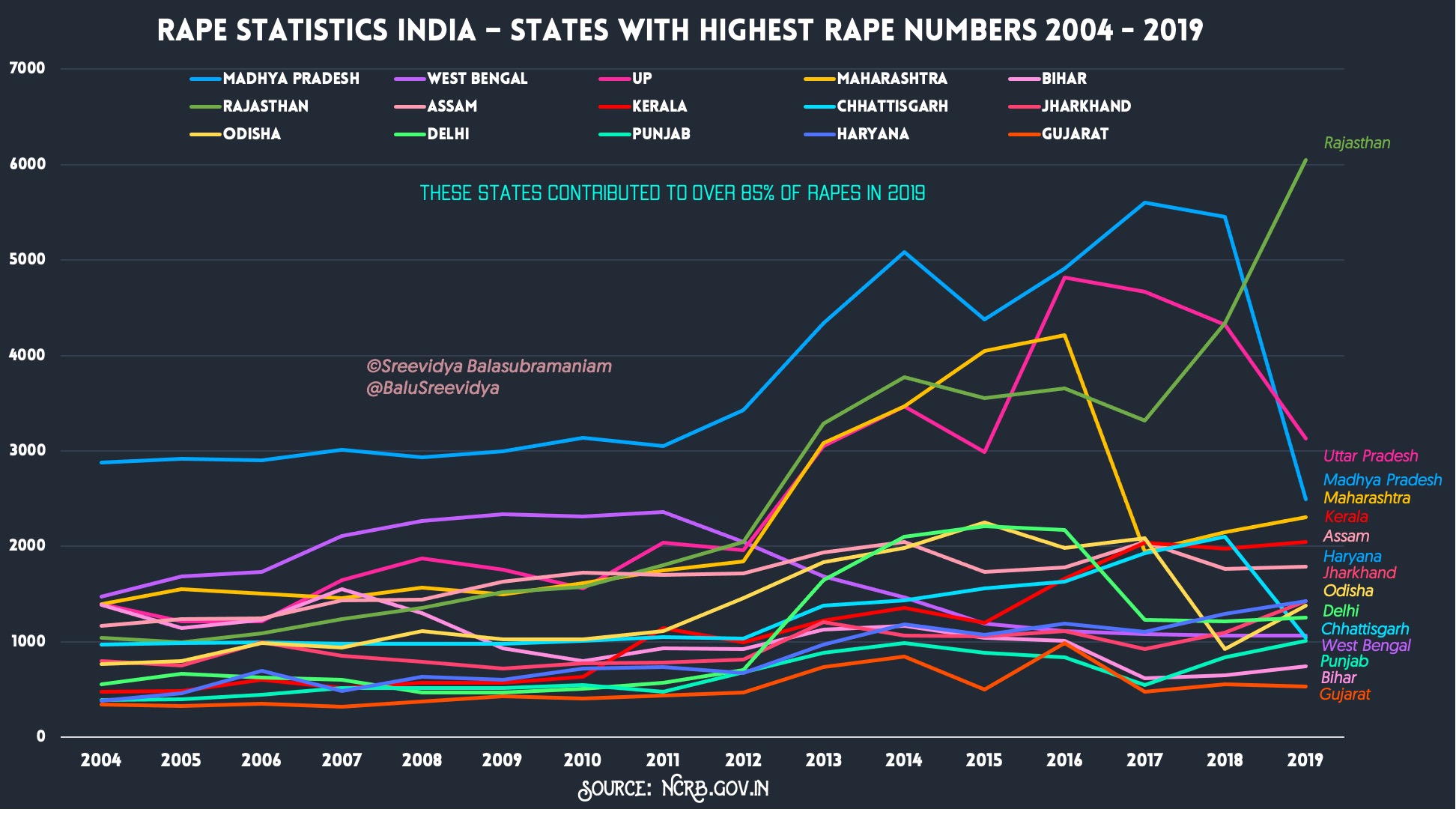 In order to illustrate trends of BJP vs non-BJP ruled states, we will discuss four clusters based on states with high number of rapes, non-BJP states, and two random clusters.

BJP shows slow rising/declining trend across the cluster. Look at the trend lines. In a rising period, BJP everywhere has had slow rise while Congress’s trend line shows steeper rise. Not the drop in Uttar Pradesh. As how the propagandists made Japanese Encephalytes a symbol of Yogi Adityanath’s rule, so has Hathras become the new symbol. In both cases, Yogiji’s efforts have caused significant decline in trends. Congress and Samajvadi Party show steep rise everywhere except MP. It’s rare to see rape rates declining under Congress rule be it before or after 2014. Graphs below show mixed trend, with Kerala being the only state with steady rise despite changing regimes. All show rising trend since 2018 Odisha/ Tamil Nadu did better than Kerala and WB under Communist and Congress rules.

Kerala has the worst trend line of ever rising cases. The recent rapes of Dalit victims never made it to national stories, including that of the death of two innocent dalit children of Walayar. Since rapes in non-BJP states is not a useful propaganda image, the propagandists conveniently ignore such gruesome and violent crimes and will insist on smearing a dead girl in Hathras. At the end of this article, some suggestions are given about how such propaganda could be busted. 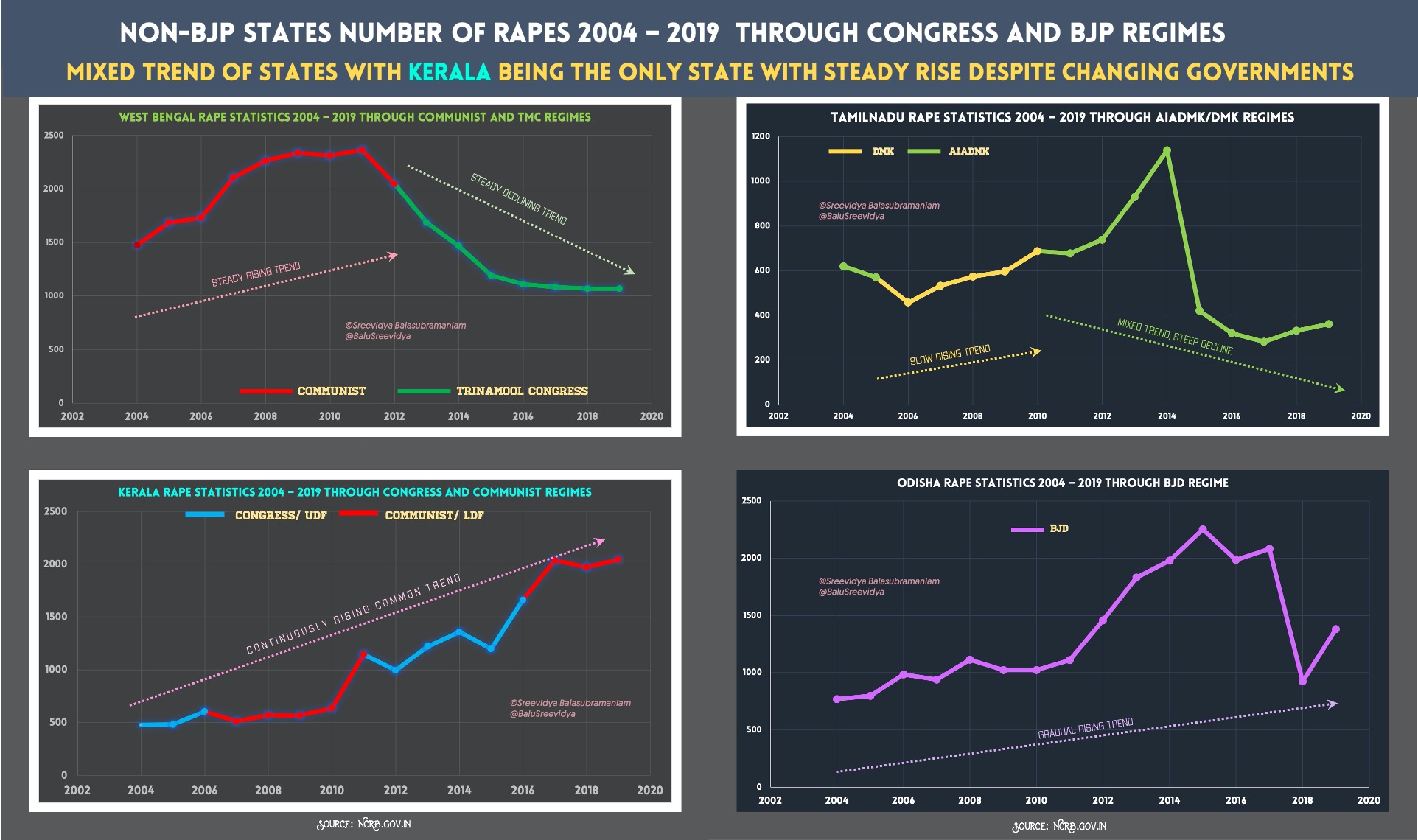 Except Haryana, BJP trends show significant decline in all other states, and Congress show significant rise. This is a spectacular graph. Shows BJP’s impact. Haryana’s trend line shows slower rise during BJP rule when compared to the steeper rise under Congress. Delhi is included here as Congress and BJP as law and order in Delhi is directly controlled by the Ministry of Home Affairs of the Central government. Delhi graph shows spectacular fall in rapes post 2014. After analysing the factual information above, one can easily summarise and conclude the rape situation in India as:

A decline in crime, especially rape is welcome. However, not a single rape or abuse to woman or man must be allowed in a cultured society like India. Every step must be taken to stop rapes. A close look at the data shows about 94% of rape happens through known people – friends, online friends, family, live-in relationships, or ex-spouses. Creating awareness and empowerment of women can play a crucial role in ensuring such crimes are stopped.

Finally, let’s take a close look at some ways to stop the success of vicious propaganda. Especially the ones that make us hang our heads in shame. Keeping in mind the first image shared in this article on the techniques of propaganda, one must ensure the follwoing:

Every rape is a heinous crime. No woman or man should be subject to any abuse. Every rapist is a criminal. But even bigger criminals are those who rape the honour of the motherland. Hundreds of Gurdwaras are in ruins in Pakistan today, some have become slaughterhouses while some have turned into meat shops