Last year a proposal to ban facial covering was put out by the far right which won a narrow victory. Now the Swiss government on Wednesday has sent a draft law to parliament seeking to put a fine on people wear face coverings and violate the national ban on face coverings. According to the draft law, they will be fined 1,000 Swiss francs ($1,000). 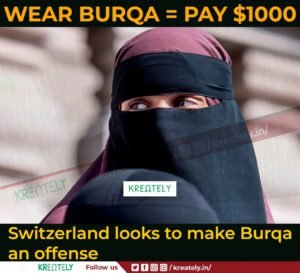 According to the bill, covering the face in a public place is prohibited. Eyes, nose and mouth must be visible. Following the bill would mean, a Muslim woman may wear a hijab but not a burqa or a Naqab which covers the whole body. This ban must be obeyed in public places which includes schools, courts, hospitals ,public transport, restaurants, shops, cinemas and sports halls.

UK: Normal Island Mourns By Embracing The Cancel Culture It Once Opposed

Iranian women protested against the Hijab and Chastity day by removing hijabs in public.