Europe switching from Paganism to Christianity, a doctrine which follows the Abrahamic Tradition of Monotheism, not only had dramatic effects for Europe itself, but also dramatic side-effects for the rest of the world as well, as this shift influenced the neighboring areas as well, and the monotheism kept on spreading like wildfire from then on, only because of Europe’s Shift, because of Europe’s Complete Conversion…

But, have you ever wondered when, why and how Europe itself converted to this Monotheistic Doctrine? Did the Europeans convert willingly, or by force? And most importantly of all, who was the Man behind this Entire Conspiracy; the Conspiracy to destroy the Old Traditions and replace it with New Abrahamic Ones?

Well, that deceitful “man”, or rather cowardly eunuch, was Constantine The Psychopath, who, after becoming The Emperor of The Roman Empire, tricked the innocent Roman Pagans into thinking that he also was a worshiper of Sol (Surya), and he also was a Pagan like others… But in reality, he was a Hidden Christian, a Secret Firm Believer of Radical Monotheism, and he kept that a Secret his entire life, and he converted to Christianity only in his death-bed, when the damage to the Pagan Traditions had already been done, when it was all over.

Such was the level of deceit and trickery to his own Roman Citizens!

He made them think their entire lives that he was a Pagan, only to reveal the truth about his true ideology, at the end, when everything was over already, when all the Pagan Temples had already been broken, when all the Pagan Practices has already been discarded, when it was already over, he then revealed his true religion, Christianity. Thus, he fooled the Roman Pagans in an unthinkable way.

While the Roman Pagans thought that Constantine was also a Pagan and he was fighting for them, for their sake, Constantine instead started enacting one anti-pagan and pro-christian policies after another! This greatly confused his innocent Roman Subjects, but they still admired and respected Constantine as a Pagan Warrior.

Some even went as far as to depict Constantine as an Incarnation or Avatar of Sol Invictus (Surya). Such was the level of admiration for the Hidden Christian, Constantine, among the Pagans of Rome.

But while the Pagans of Rome were glorifying this person, the person himself, Constantine, on the other hand, was busy passing more Laws which banned the Making of New Pagan Temples, and even more Laws insisting to destroy the old ones. This is why you will many of those Marble Pagan Temples are heavily damaged, as those very temples came under heavy destruction during Constantine’s Dictatorship.

The Constantine Episode is so scary, as he is an Aurangzeb that did not reveal that he was an Aurangzeb, and he kept it hidden until the very end, and people kept thinking of him as their hero, their savior, while he only wanted to destroy their Old Traditions and impose Christianity upon them, and he succeeded in doing that, as entire Europe is Christian now.

So, in other words, Constantine is a more Cunning Version of Aurangzeb who Actually Got Successful in Accomplishing His Goals, who actually managed to convert Entire Europe to his Abrahamic Christian Religion — That’s what makes this entire Constantine Episode so scary.

Con-stantine conned the Roman Pagans, he scammed them, big time. He lied to them his entire life, and he back-stabbed them at the very end, and by the end of his Regime, most of the Pagan Temples had already been closed down, and it was already too late.

This is the entire Timeline of What Happened Under Constantine’s Regime, and the After-Effects on Roman Pagans :- 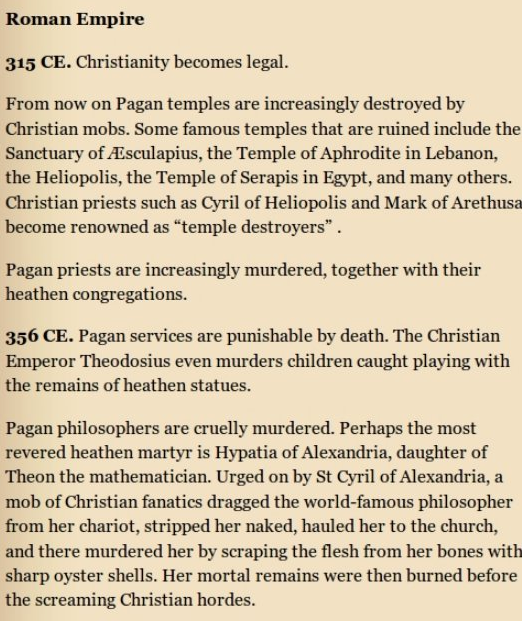 Pagan Philosophers were killed, raped, tortured, and everything else that you can imagine by the Fanatic Christian Hordes, all because Constantine not only allowed it but actively enabled and supported it. He endorsed the destruction of the Old Culture and a Forceful Imposition of Christian Monotheist Culture, the culture of radicalism.

Not to mention that, our Mister Constantine here, also Boiled his own Wife, alive.
And He, the Constantine, also executed his own son, as well. So, the Roman Emperor Constantine, this Christian Terrorist, killed his own wife and son.
So, there’s that… Just Casual Abrahamic Things… What can we say… 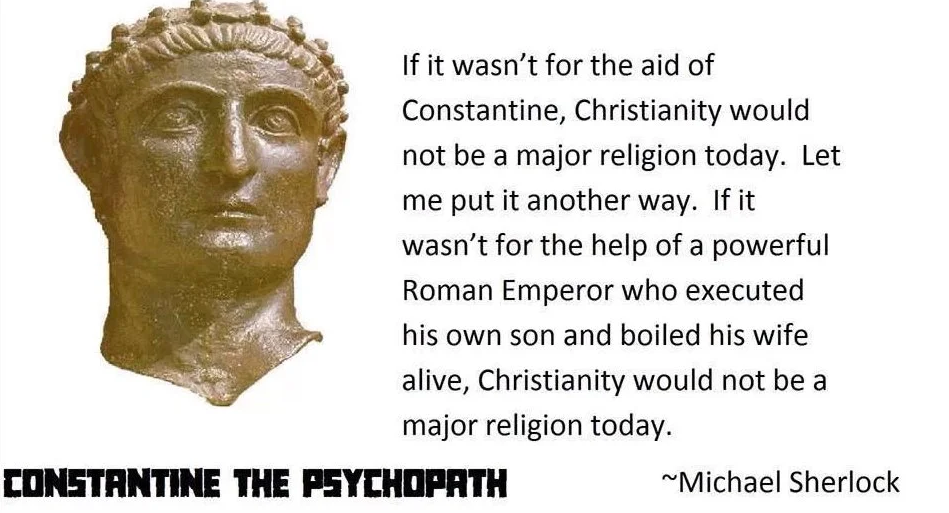 When Mughals Helped The Christian Portuguese Fight Against Marathas

Kashyapa Muni – The Founder of Kashmir