While activists are busy questioning Bagheshwar Dham, it takes multiple instances for the public to question Christian missionaries on social media and still they fail to get medical facilities served on touch by the pastor.

Ironically, no one objects to the idea that healing can occur through touch. The evangelist Bajinder Singh, who became a Christian while incarcerated, frequently touches a participant on this stage designed to trick the audience, causing them to scurry around like insane.

We can see how this kind of drama is never seen on any national TV neither any activists of them dare to talk about it.

This madness is never questioned while saints of Bagheshwar Dham, which is established for Lord Hanuman Bhakti near a temple in Madhya Pradesh believe it to be 3 centuries old. Bageshwar Dham has been widely known for its charities which include a grand ashram, marriage of girls coming from poor households, stopping conversions, and reversed conversion of 300 tribal people who were targeted by Christian missionaries.

Recently, the Bageshwar Dham Peethadhishwar Pandit Dhirendra Shastri has declared that he will ensure the “Ghar Wapasi” of converted Hindus as long as he is alive. Additionally, he pledged to prohibit religious conversions. Shastri recently found himself in hot water after a social activist claimed that he was encouraging superstitions.

“We’ll ensure that the greatest number of people have access to “Ghar Wapsi” and prevent religious conversion as long as we’re alive. We must prioritise Hindu unity and shun those who criticise Sanatana Dharma “said Shastri in Raipur, where he is allegedly holding a “Divya Darbar.”

He stated earlier this month that Hindus should bring JCBs to their homes since India belongs to Sanatanis if someone throws stones at their home or during the Ram Navami procession. He pleaded with Hindus to rise up and defend the Dharma with their lives.

While this institution influences others to embrace Sanatana, it is obvious that they will be the target of the media. This leftist-media-Bollywood cabal made their best attempts in maligning the image of Hindu saints. Hindu saints are superstitious and Hindu gods are nothing more than imagination. Ramayan and Mahabharata are epics while the Birth of Jesus is history.

Also read: When was Jesus born? 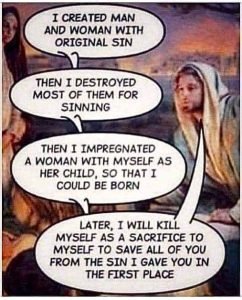 Diwali and Holi are meant for activism while we can cut trees for Christmas. Oh! how can we forget the reality of Santa Claus?

What if Corona virus pendemic was a ZOMBIES apocalypse ?