I am Aditya Tikoo. It was, the morning of 19th January 1990. I (then 5) was playing with my mother on the bed. She was 7 months pregnant. She took me in her lap and asked – “what do you want – baby brother or sister?”. “Brother” – I replied. She kissed my forehead and held her hand on my head in affection.

Suddenly we heard a noise outside. It was some mob that was nearing our house. It kept getting noisy with each moment. My father who had gone outside rushed into the house and came to our room. I saw his eyes full of fear for the first time. He was a school master in Srinagar. “They are coming”, he said.

I felt my mother’s grip around me was tightened suddenly. I looked at her face. She fainted. I asked, what happened? She almost cried, said- nothing Bachcha. She covered me with her shawl. I could clearly hear her heartbeats as my ears were pushed against her. Her heart was beating abnormally. I could not see her face now. It was all dark inside. But now I could realise, she was wiping her tears.

The procession was now outside our locality which had 7-8 Hindu homes. Someone from the mob shouted – “Thats the master’s house”. And then started the announcement from the nearby mosques – “Asi gachchi Pakistan, Batao roas te Batanev san” (we want to become Pakistan with Hindu women not with their men). It was announced by the mob. All men must leave valley leaving behind their women. Some of them kicked the gate and pelted stones at the window. We were terrified. I was in mother’s arms. Who was shivering. Carrying three hearts. Two within, one in arms.

Few minutes later, 3-4 males from the locality knocked the door. My father opened it in fear. They were Hindu neighbours. Came to inform we are leaving in 2 hours. They have gone mad. They won’t listen to us. They won’t let us live anymore. This is our last day in valley.

While they were discussing how to flee, those words of mob – Asi gachchi Pakistan, Batao roas te Batanev san were playing in my mind endlessly. I only knew a woman in my life. She was my mother. I asked myself, what will they do with my mother? Why do they want her for Pakistan? I asked after a silence – Maa, what are they saying? Who are they? Why will they take you away? Will I go with you?

Na bachcha. I am your mother. I will be with you always – she cried bursting into tears.

In few hours, my father arranged tickets for us. Mother packed a few things – some jewellery, cash and a Shiva Ling. I was looking at her in fear while she was packing. She was constantly crying. She consoled me a couple of times and pretended she is fine. But I knew she wasn’t.

We left home in the noise of loudspeakers from mosques. I can still hear those voices. Those aggressive tones, words and call for action. I could see skullcaps around staring at us with the glare of victory. Eyes that wanted to peel the skin off my mother and eat her flesh.

My father tried to pick me up since mother was advised not to lift heavy things. I thought if I leave her, she will go with mob.

I cried like never before. I said – Maa take me with you. Don’t leave. She tried to explain- I am not leaving. I am with you. Just be with Dad. I refused. My father cried for the first time. He forcibly snatched me from mother again. I was so terrified that I almost felt unconscious.

When I got my consciousness back, I found myself in mother’s lap in the bus. She was crying and thanking God. We fled the valley. There were thousands like us. We lived in a tent in Jammu for next 2 months. A lot happened there.

My mother had miscarriage. She lost the child. She lost the smile forever. A few years ago, I got to know the full story. When I fell unconscious, she did not let Dad touch me. She carried me for all the time so that when I open my eyes, I find her right in front. Because this is what I wanted. To be carried by her. She walked and ran for 5 long kilometers carrying two children – one in arms, one inside to catch the bus. She got the bus but lost her other child.

We are settled in Delhi now. With her sacrifice and blessings, I am doing well in life. My mother doesn’t talk much.

Listen Shehla Rashid, I am not a storyteller. Neither are you some dear to me with whom I wanted to share what I never did till today.

I just want you to know one thing. Whenever my mother listens to the Azadi slogans or Kashmiriyat or La ilah illillaah on TV in Kashmir or Delhi, she sees her child bleeding to death. She cries in other room. Thinking about her child. Who was snatched away from him by the slogans of Azadi, Pakistan and La ilaah illillaah.

Your slogans and defence of Azadi lovers remind my mother of her child who was brutally murdered by you, your fathers and Islamists.

Thus, you are my enemy. Whenever someone tries to harm you or slaps you or beats you or threatens you, I feel he is standing with me for my lost sibling who I never saw. Whenever someone silences the voices of Azadi, hum le ke rahenge azadi, hum kya chahte azadi etc whether Army in Kashmir or people like ABVP or Agniveer in Delhi, we feel as if someone is coming to rescue us and our lost baby.

I find you personally responsible for tears of blood my mother shed all these years. You and millions of Azadi seeker Islamist swines are the reason she has never smiled since 19th January 1989. She is the victim. You are the attackers. Game will begin now.

You Jihadis will be slapped, beaten up and destroyed wherever you are. Those whom army can’t shoot, will be taken care of by us. You cry victim. We will beat you more. For our mother’s blood. For her tears. For her lost child. For her lost smile.

Whatever has happened to you is just a trailer. You cry that a few stones hit you and gave you scratches. Know that my mother almost bled to death. My mother saw her child bleed to death. Yours is a drama. Her’s was real.

We swear to the dignity of all those mothers. All rapist Jihadi Kashmiri Islamists will be silenced by all means. Kashmir is not yours. Forget about it. Forever. 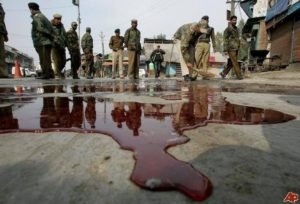 – From a real Kashmiri and son of Mother India.

Parliament should bring law to honour Shri Ram and Shri Krishna who are India’s culture and tradition : Allahabad High Court