This Is My Frist Article On Kreately. Please Read Complete. Give Review.

The title may force you to think about answer and you may find the answer in terms of ‘Yes’ or may be ‘No’ for some extent but here is one thing that I want to share that never try to find the answer with the help of emotion only rather this you must dive deep into the question and should put yourself on the situation.

Here I am not saying that you must say ‘No’ and if you will say ‘Yes’ then you haven’t understand the situation, may be the answer is ‘yes’ or ‘No’.

Lets find the answer together.

Why I have asked you this question. Well because recently in France great controversy is happening which has triggered ‘Radical Muslims’ all around the world and main thing is France president ‘Emmanuel Macron’ has burnt the ‘Radical Islamists’ even more after he had supported ‘Anti Radical Islamist’ voice openly and that’s why many people are thinking the ‘PM Modi’ should also do the same in India as in India radicals has done more damage to country then in France. So people are expecting from ‘PM Modi’ to do same which is right to expecting for some extent as ‘PM Modi’ has become the hope for India to save it from radicals.

But before discussing what PM should do or not let’s first look at short detail about ‘what is happening in France’.

As you may already know about ‘Charlie-Hebdo’ magazine of France as it has become popular in recent times. Charlie-Hebdo is a France satirical magazine. In this October Charlie-Hebdo decided to republish the ‘Prophet Mohamad’ cartoon in its magazine for which it had faced a terror attack in 2015 after publishing the cartoon on Mohamad in 2006, In this attack 12 people were killed and 11 were injured by two radical Muslims.

When Charlie-Hebdo announced to republish it radical Islamist had got triggered and many Muslim terror organization had threatened of a Terror attack on Charlie-Hebdo. After publishing this cartoon radicals had attacked on it had some people were injured. After this attack France President ‘Emmanuel Macron’ had said that we will protect our freedom of speech and will destroy these radicals. But main thing which triggered the most Muslim country and Radicals happened after this.

On 16 October in Peris a school teacher named ‘Samuel Kitty’ were strangled to death by a 19 year old Muslim Guy just because he showed the cartoon of Prophet Mohamed in class for discussion. After this act the entire France was angered. France President ‘Emmanuel Macron’ paid tribute to that school teacher. Macron gave France’s highest honor to the teacher and gave a statement that he would not succumb to Islamic Foundation.

France government showed the Prophet Mohamad cartoon of Charlie-Hebdo on its government building in tribute to its teacher ‘Samuel Petty’. This incident Fired the radicals all over the world and Muslims all across the world started a trend to ‘Boycott France’ including in India.

Along with this Macron also said that France with destroy the Radicals and will shut the Foreign funded Mosque in its country.

Here are some tweets of President Emmanuel Macron that clearly shows that how strong Macron has Tight up his arms against radicals. 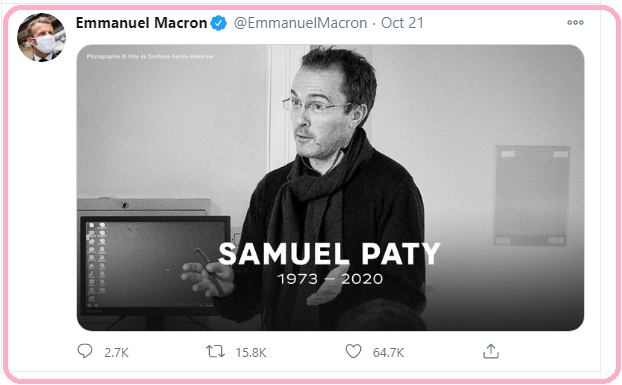 After teacher’s killing, within just 10 days on 29 October another terror attack occurred on France. This time inside a Church in ‘Nice’ city, France a ‘Tunisian Muslim Migrant’ who came in France just one Month ago had killed 3 older persons(2 women 1man) with knife. The killer had arrested on the spot by Police and detained.

This terror attack had shocked the entire France and showed clear Face of ‘Islamic Terrorism’ to France people which India want to show them from long ago. Many big leaders of several countries had condemn this terror attack on France. Here are some tweets of some leaders–/

Here you can see that big leaders like ‘Donald J. Trump’ and ‘Narendra Modi’ are supporting France in this terror attack. Here you can also see that Macron has tighten up his arms to defend its country by Radicals.

Let us come to question. Weather Modi should do this or not. If you think that Modi do the same and you are thinking that if you were prime minister you would definitely do the same then you must think again.

It is right that you may think that France has faced just a tip of ice-burg of the Islamic terrorism which India has Faced and India should take action more openly on Islamic terrorism than France. But here is a problem that this is India not France. What I mean by that ?

France is like a Village where some Hyena entered and villagers know the danger of Hyenas so they decided to take action against them but in other hand India is a village where Hyenas are more than people so you can’t take action against them more openly in addition of this India as a village has some people that are feeding these Hyenas so that they can over take entire village and these people are included in system so it is even harder to tackle to these Hyenas.

If you think that Modi ji is not doing what he should do to tackle Islamic terrorism then you must know that what Modi is doing is far more better against Islamist terrorism than any one could ever do. The time when Modi Ji became PM of nation more than half of the country had been eaten internally by radicles and It was a huge challenge to unite the country against Islamic Terrorism without mentioning “Islamic Terrorism Word”.

Another reason that differ France from India about Islamic terrorism is that France has no one in their system that support Islamic Terrorism. Whole country has been united against Islamic Terrorism included their opposition parties Unlike India where Modi has to fight with not only Terrorism but also these—/

And Of course how can we forget these ones–/

These are some people which fortunately France does not have unlike India.

Islamist have an entire ecosystem of Urban Naxalists of their own in India and not in France that is why France President can take action against Poisonous Tree of Islamic terrorism before Its full growth and in India this poisonous tree has been grown completely and it is just a matter of Time when this Tree will take over the Entire Forest before we cut it.

Modi ji can’t take open action against Islamic Terrorism and there is another reason for this that if you randomly pick some people in India and tell them about Islamic terrorism, well you see what will happen to you. Even people that are victims of Terrorism will say you hater, biased, non-secular etc. This is because people of India are Brainwashed from last 7 decades that Hindi-Muslims = Bhai-Bhai even if they lost the land as large as 20% of total area(before Partition) as Pakistan and still disputes in Kashmir.

If you Flip the position of Pm Modi and Emmanuel Macron you will see that not even a single Islamic Terrorist will left in France and in India, Well You can Imagine. Macron will be unable to handle the Islamists for Just one Year this is because of Complexity of problems that India have.

There is no doubt about it that France president Macron has Emerged as a strongest leader in west for tackling Islamic Terrorism but one cannot compare Modi and Macron in tackling radicles as they have different situations to face.

It is true that these Islamists have done more damage in India than in France and they must be punished for this more than France did but It is also true that what Pm Modi is doing against Radicles is exactly what need to be done in India because this is the only last way these Islamists can be tackled.

Modi ji knows that he can’t act directly against Islamists currently and that is why Modi Government is passing laws one by one to tackle Islamists.

You don’t need to tell Pm Modi what to do Because he wants to do more than you want for you. The only thing that needs to be done is that you must trust Pm Modi and give him your full support. This will strength Pm Modi even more.

And Remember one thing—
YOGI Is COMING……

Ajeet Bharti, the lone warrior standing against the arbitrariness of the judiciary