It comes as a surprise that Sikandar I of Kashmir is a name which entered the annals of infamy as But-Shikan – the destroyer of idols was a late child to his parents and was born because of the blessings of a Hindu Sadhu Brahmanatha. His father died when he was very young and naturally, his reign started with a regency – a regency of iconoclasts. Very early in his life, he became interested in Islam (Jonaraja calls it Yavana Darsana or the Philosophy of the Yavanas) and his kingdom acted as a magnet for Muslim migration into Kashmir. One of them was Meer Saiyyad Muhammad who, in time, became a great Islamic scholar. Sikandar fell into his influence completely and slowly Muslims gained strength. Jonaraja’s hatred for the change in situation was clearly visible in his narrative. For instance, notice the lines

Attracted by the gifts and honors which the king bestowed, and by his kindness, the mlechchhas entered Kashmira, even as locusts enter a good field of corn.

In a set of 15 verses, he shows the end of Hinduism in Kashmir and the forcible replacement of it by Islam. 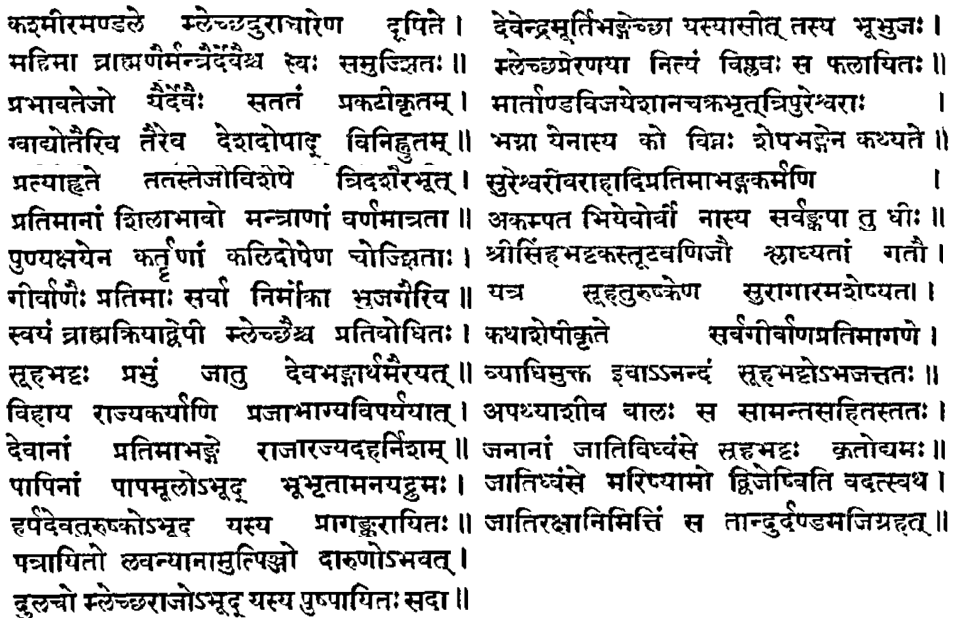 JC Dutt’s translation is not completely correct but it reads thus.

The kingdom of Kashmira was polluted by the evil practices of the mlechchhas, and the Brahmanas, the mantras, and the gods relinquished their power. The gods who used to make the glory of their prowess manifest, even as fire-flies manifest their light, now hid their glory on account of the country’s sin. When the gods withdrew their glory, their images became mere stones, and the mantras, mere letters. Owing to the sin of the Kali Yuga, the merits of those who did virtuous acts were lost, and the gods deserted the images, even as serpents cast off their skins. As a crystal becomes red or white or black by the reflection of the object that is near it, even so, the king became changed. Suhabhatta who disregarded the acts enjoined by the Vedas, and was instructed by the mlechchhas, instigated the king to break down the images of gods. The good fortune of the subjects left them, and so the king forgot his kingly duties and took a delight, day and night, in breaking images. Of the tree of misgovernment Harshadeva the Turushka was the seedling, sinfulness was the root and the terrible devastations caused by the Lavanyas were the leaves. Its flower was Dalacha the king of the mlechchhas; and its fruits were the daily troubles of the king who broke images at the instigations of the mlechchhas. He broke the images of Marttanda, Vishaya, Ishana, Chakrabhrit, and Tripureshvar; but what can be said of the evil that came on him by the breaking of the Shesha? When Sureshvara, Varaha, and others were broken, the world trembled, as if through fear, but not so the mind of the wicked king. There was no city, no town, no village, no wood, where Suha the Turushka left the temples of gods unbroken. Of the images which once had existed, the name alone was left, and Suhabhatta then felt the satisfaction which one feels on recovering from illness. Suhabhatta with the leaders of the army tried to destroy the caste of the people; it was like a boy eating the unwholesome food. The Brahmanas declared that they would die if they lost their caste, and Suhabhatta subjected them to a heavy fine because they held to their caste.

Then, we learn that the purge continued under Suhubhatta’s leadership during the reign of Sikandar’s son Ali Shah.

The Brahmanas burnt themselves in the flaming fire through fear of committing sin, and through fear of him who was like the heat of the fire; and thus they escaped. Struck by fear some Brahmanas killed themselves by means of poison, some by the rope, others by drowning themselves in water, others again by falling from a precipice, and others burnt themselves. The country was contaminated by hatred, and the king’s favourite (Suha) could not prevent one man in a thousand from committing suicide. This wicked man disliked the weight of the kingdom which was hard to be borne, but he delighted in the cries of the twice-born, which gave him pleasure. A multitude of Brahmanas who prided on their caste fled from the country through byeroads, as the main roads were closed, even as men flee under ground when the doors of their houses are closed. Even as men depart from this World, so did the Brahmanas flee to foreign countries, the son leaving his father behind, and the father leaving his son, to the Death like Suha who sorrowed at the escape of the Brahmanas. The difficult country through which they passed, the scant food, painful illness, and the torments of hell during life time removed from the minds of the Brahmanas the fear of hell. Oppressed by various calamities, such as encounter with the enemy, fear of snakes, fierce heat, and scant food, many Brahmanas perished on the way, and thus obtained relief. Where was then their bath, their meditation, their austerity, and where was then their prayer? The Brahmanas wandered about in villages begging, and thus spent their time. The wrong which was done to the Brahmanas proved beneficial to them, since exiled by Suha, the twice-born removed their sins by visiting holy places. Some twice born men who were anxious to save their wives, emaciated by want of food, did not depart to foreign countries, but wandered about in Kashmira wearing the dress of the mlechchhas. Suha withheld the allowances of the twice born with a view to extinguish learning, and they, in expectation of a mouthful of food, went from house to house, putting out their tongues like dogs.

And clearly, after that, there is no turning back whatsoever. King after king continued what Sikandar, now famous as Butshikan did – after all, his acts are the epitome of glory for the generations to come!! And what he did that day still reflect in today’s psyche and way of life. For instance, when the British sold Kashmir to Dogras, the Governors of Kashmir and Kohistan submitted a petition begging the British not to place them under the Dogras with the threat of a rebellion. 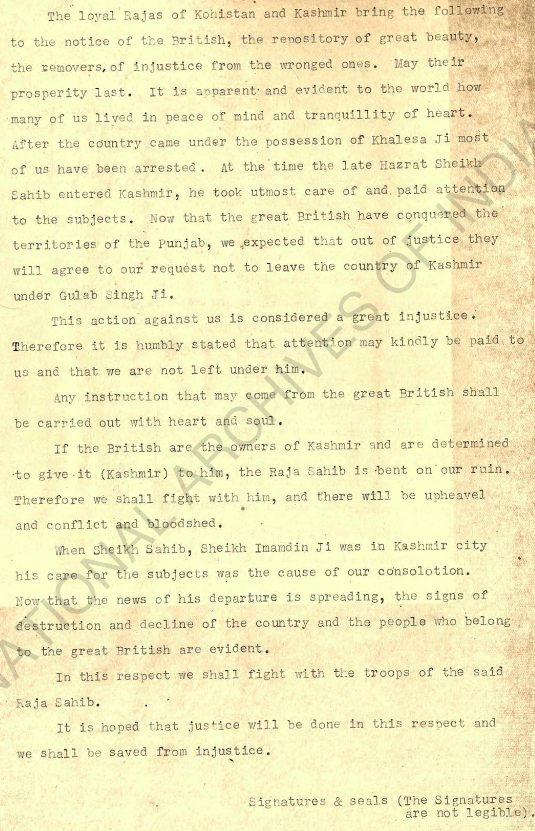 Remembering the Dead Delhi locals in the Hands of Nadir Shah on 22nd March, 1739