According to the information by Hindu IT Cell – an NGO active for Hindu causes, five FIRs has been registered against self-proclaimed journalist Rana Ayyub for calling Hindu students of Udupi college, who had protested with Saffron flags, as terrorists. This move came after a video of Rana’s recent interview with BBC Journalist Yalda Hakim came on social media, which agitated the Hindus who were just raising their voice for a common dress code in an educational institution.

Earlier during the day, in an interview to BBC, Rana Ayyub had referred to Hindu students protesting against Burqa as vigilantes and terrorists. During the course of Interview, Rana in an desperate and in her usual shrill tone which had been so typical to her, she began ranting “…Why suddenly has this group of young Hindu vigilantes – Hindu terrorists for that matter who are hosting saffron flags in an educational complex in Karnataka?” Also in a provocative tone, she was seen shouting, “Why are male students unfurling a saffron flag in an educational institution, what does that mean?”

Meanwhile earlier too, Ashutosh J Dubey, a lawyer and activist at Bombay High Court had filed an FIR against Rana Ayyub on Wednesday afternoon. The Online complaint registered with Greater Mumbai Police at Bandra read, “The videos are willfully spelling inciting and derogatory statements against the students who all hold Saffron flags,” In the complaint, Dubey had complained that Ayyub in her video has violated certain IPC sections for her hate speech. 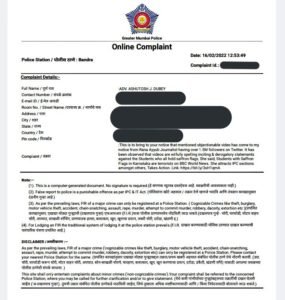 352nd anniversary of the ‘Battle of Sinhagad’, the near impossible mission won by Marathas.