The tweet of Kashmiri IAS Shah Faesal is going viral on social media. In this tweet, IAS Shah has targeted Islamic countries on the pretext of Rishi Sunak reaching the post of Prime Minister of Britain. And told about the beauty of India.

Shah Faesal shared a thread of four tweets. He wrote – It is possible only in India that a Muslim youth from Kashmir can top the Indian Civil Service Exam. Can reach the top departments of the government. can go against the government. Then the same government saves it and adopts it.

The year 2009 UPSC topper Shah Faesal further wrote – Rishi Sunak becoming the Prime Minister of Britain can definitely surprise our neighbors, where the constitution prevents non-Muslims from accessing the main departments of the government. But the Indian Constitution has never discriminated against ethnic and religious minorities. Indian Muslims live as equal citizens, with so much freedom that Islamic countries cannot even imagine.

Giving the example of his own journey, IAS Shah Faesal said- My own life is also like a journey. I walked shoulder to shoulder with 130 crore countrymen. Here I have felt a sense of belonging, respect, encouragement, and sometimes pampering at every turn. This is India.

In the end, IAS Shah said – From Maulana Azad to Dr. Manmohan Singh and Dr. Zakir Hussain to President Draupadi Murmu, India has always been a country of equal opportunities for all. Even now the way to reach the top is open to all. It would not be wrong to say that I myself have seen everything from the top.

Although Faesal did not spell out what he meant by “another chance”, speculation had been rife here over the past few days that he might return to government service either as an IAS officer or in some advisory role to the Lieutenant Governor of Jammu and Kashmir.

Well, this man quit IAS citing atrocities on Kashmiris and the marginalization of Muslims in India.

Originally this guy resigned from IAS only to pursue his political ambition (inspired by Omar Abdullah’s lavish life) by citing the reason for “unabated killings of Kashmiris” and “Kashmiri live matters”(similar to the black life matters slogan in the USA) and worst of all he attended Harvard University on government’s expenses as IAS and hobnobbed there with Pakistanis and Islamists cadres. He came back to India and resigned from IAS and made his own political party. When he was in service there too he crossed the line many a time when he wrote antinational articles in newspapers but was let off by the previous UPA government . 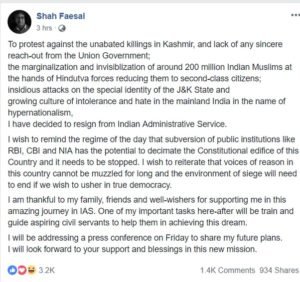 1. “To PROTEST against the unabated killings in Kashmir.”
a.) This has been ruling his mind for the past few years. A gentle scroll on his Facebook page will make it amply clear. It is nothing new. He wants the youth of Kashmir to find a new direction in their lives through the right employment and education.

b.) Who protests by resigning and joining politics?! Why did you join in the first place, knowing the reality of Kashmir? God knows.

2. The marginalization and invisibilization of around 200 million Indian Muslims at the hands of Hindutva forces reducing them to second-class citizens.”

a.) This statement caught me off guard. This might be the first time he used the word – Hindutva. Correct me if I’m wrong. This “second-class citizens” jibe is so much used by NDTV-type journalism.

3. “Growing culture of intolerance and hate in mainland India in the name of hypernationalism”

a.) More usage of the specific word “intolerance” and usage of the word “mainland India.” I wonder why he considers Kashmir a separate territory. Isn’t it a part of mainland India? I seriously doubt his sincerity toward the nation as a whole.

4. “I wish to reiterate that voices of reason in this country cannot be muzzled for long and the environment of siege will need to end if we wish to usher in a true democracy.”

a.) He took the burden of representing the voices of reason like seasoned politicians often do and make large promises to usher in “true democracy.”

Shah Faesal, the momentary blue-eyed boy of Indian liberals who would liberate Kashmir from the brutal clutches of the demonic Indian state has now come out in the open as perhaps one of the most vociferous bhakts of Prime Minister Narendra Modi and his government. Shah Faesal, an IAS topper has always been a subject of headlines. Although he was put under house arrest after the revocation of Kashmir’s special status in August 2019 and kept under the same for quite some time– the detention reportedly marked a learning curve in the man’s life, as he quit politics soon after and began life in a new avatar.

In a series of tweets, Faisal spoke about his idealism letting him down in 2019 when he resigned from government service to join politics.

“Eight months of my life (Jan 2019-Aug 2019) created so much baggage that I was almost finished. While chasing a chimera, I lost almost everything that I had built over the years. Job. Friends. Reputation. Public goodwill. But I never lost hope. My idealism had let me down,” he tweeted.

“But I had faith in myself. That I would undo the mistakes I had made. That life would give me another chance. A part of me is exhausted with the memory of those 8 months and wants to erase that legacy. Much of it is already gone. Time will mop off the rest I believe,” he added.

He violated civil service conduct rules by taking an anti-government stance but was never reprimanded for that. In 2014 DIG central Kashmir range told about his inefficiency and frivolous excuses to run away from work and responsibility. His regular appearance on NDTV channel too raised many eyebrows.

This has India’s liberals all riled up. How did the Modi government, after all, manage to turn one of its most pointed critics and until recently, a borderline separatist for the “cause of Kashmir” into a person who is today praising the Modi government’s vaccination campaign around the world?

IMA slams and seeks resignation of Punjab Health Minister for forcing top surgeon to lie down on dirty hospital mattress.