Amid ongoing Russia-Ukraine crisis ‘Swastika’, the sacred hindu symbol is repeatedly being falsely equated with Nazi’s Hakenkreuz and Russian symbol of war Z.

During the Ukraine-Russia war where the eyes of every person around the globe is on Ukrainian President Volodymyr Zelenskyy, he decided to use the term ‘Swastika’ in place of ‘Hakenkreuz’ to represent Nazi’s symbol.
Ukrainian President Volodymyr Zelenskyy while delivering his speech said “There is no blood on our flag. There are no and will never be black spots on it. There are no and will never be any SWASTIKAS on it. The Ukrainian flag is the land. Peaceful, fertile, golden and without tanks… So it was. And so it will be. We never wanted this war. But it was brought to us. We never dreamed of killing. But we have to knock out the enemy from our land and from our lives. We have to endure what no other European country has seen in 80 years.” 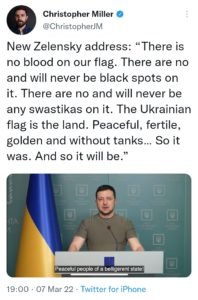 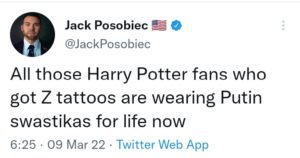 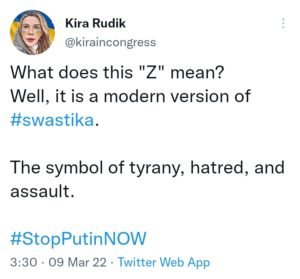 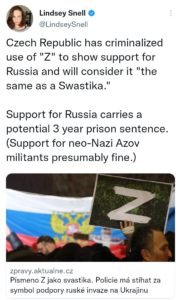 Amid this ongoing war false equivalence are being drawn between Swastika and Nazi’s Hakenkreuz from all directions. The news appeared because of the discussions around the letter Z spotted on Russian tanks and military trucks stationed near the Ukrainian border. You are just a search away in twitter and you will witness the rising Hinduphobia during the war in which Hindus are nowhere related. From all directions, attempts are being made to falsely represent Swastika as a symbol of hate. Steve Schmidt who is an American public affairs strategist wrote “It’s Putin’s swastika. Make no mistake. His autocracy is mutating into a totalitarian fascist police state before our eyes. Look for the American far right to embrace it.” Kira Rudyk who is Ukrainian politician and current leader of the political party Voice and since 2019 a member of the Ukrainian parliament too went into the same bracket of drawing false equivalence. On her twitter handle she wrote ” What does this “Z” mean?Well, it is a modern version of #swastika.The symbol of tyrany, hatred, and assault.#StopPutinNOW”. 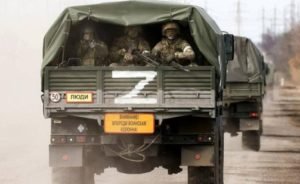 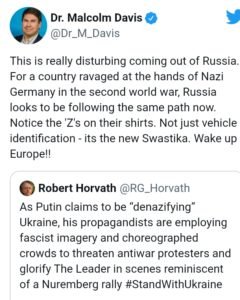 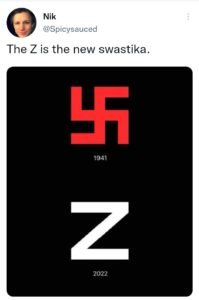 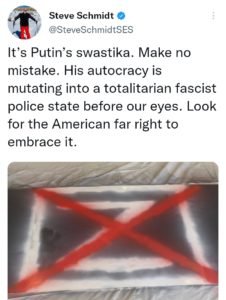 Once @BharadwajSpeaks presented a twitter thread in order to dismantle the claims Audrey Truschke who said “Nazi “Hakenkreuz” is nothing but “German translation” of Swastika.” @BharadwajSpeaks wrote a brilliant thread where he proved how Nazi’s symbol Hakenkreuz is nowhere related to Swastika but is in close relations with Christian Cross. Here is the thread-

1. Audrey insists Nazi “Hakenkreuz” is nothing but “German translation” of  Swastika.She even goes on to say the Nazi translation did not erase “the basic meaning and history” of swastika.Is this really so? This thread EXPOSES closely guarded academic secrets about this topic. As I have mentioned elsewhere, Hitler never used the word Swastika himself. He used the word Hakenkreuz.This claim is FALSE.Germans did not use “Hakenkreuz” for  Swastika. They used it for Christian hooked cross. Hakenkreuz is literal German translation of “hooked cross”.

2. But what is Hakenkreuz/ Hooked cross? What did Nazis understand by it?What were they so enamored by this symbol? Did they see the symbol as mere translation of Indic symbol Swastika? Did they see the Hakenkreuz as an ancient Indian symbol? Did they borrow this Indian symbol?Only the contemporary Nazi literature can tell us what the Nazis actually thought about Swastika.I begin by considering the views of Erich Koch. Koch was a top officer of Nazi Germany. He organised Nazi concentration camps. He was sentenced to life imprisonment after the war. However, Erich Koch was not just a Nazi who gαssed people to dεath in concentration camps.He was a president of German protestant Church Synod. He was a scholar of Bible and would recite the entire New Testament orally. As such, his views about Hakenkreuz are very revealing.”Truly, Christ has returned. The second coming of Christ has happened.
Christ has now come in the form of Hitler. He has come to exterminate the Marxists and the irreligious. He now comes not with a cross but with the hooked cross (Haken Kreuz)”- Erich Koch. Koch was a brutal, ruthless Nazi of the first order. He personified Nazi barbarity by playing a leading role in the murdεr of thousands of Jews and their deportation to camps.Yet, even in his post war testimony, he insisted that he was doing nothing but the work of Christ!.Koch was not alone. Even Joseph Goebbels, one of Hitler’s closest acolytes, held similar eschatological Christian views about “hooked cross”.He saw Nazism as an apocalyptic movement that personifies Christ’s mission of  destroying Anti-Christian Jewish and Marxist forces.At the end of his autobiographical diary named Michael, Joseph Goebbels declares-“The war we are now waging today is a struggle between Jesus Christ and Marx”. Hans Schemm was an educator and a top minister of Nazi Germany.He famously declared -“Our religion is Christ, our politics is motherland”. Explaining the meaning of Nazi Hakenkreuz, he also alluded to Hitler as a personification of  Christ.”In its first appearance, the cross used to be straight because Christ had come with love.Now, the day of judgement has arrived. The cross is hooked (referring to Hakenkreuz) because Christ has come with wrath.  Redeem yourself”- Hans Schemm.Christian eschatology was at the core of Nazi ideology since inception.When Nazi party was founded, Hitler announced 25-point Program.Point 24 says Nazi Party advocates “positive Christianity”.It “combats Jewish spirit within & around us”

3. It is clear that Hakenkreuz of Nazis had absolutely nothing to Swastika of Hindus.Nazi Hakenkreuz had a Christian eschatological concept of second coming of the Christ with the hooked cross.Why then has the Nazi hooked cross been dissociated from its Christian background?Why has Nazi Hooked Cross been dissociated with its Christian roots & identified with Hindu swastika?There is absolutely NO EVIDENCE that Nazis borrowed this symbol from India.
In fact, hooked cross has always been one of Church motifs.There is Hooked Cross motif in Vatican.After Nazis lost the war & were disgraced when their crimes were out for the world to see, any association with Nazis was deemed unpopular. Christian apologists spilled a lot of ink to
1) Dissociate Nazism from Christianity.
2) Dissociate Hooked Cross with Christian cross

4. Hitler’s autobiography Mein Kampf  was translated into English by Christian pastor James Murphy.He translated “Hooked Cross” as “Swastika” which was a visually similar but completely unrelated symbol. “Swastika” coming from “Swasti” (well being) was infact truly opposite to it.With this intentionally flawed translation, he wanted to kiII two birds in one shot.1) Dissociate Nazis with Christianity.2) Associate Nazis with Hinduism.This was later followed by all other translators.So deeply entrenched and widely prevalent is this propaganda that even NCERT textbook says .”Hitler understood the significance of rituals ….and used ancient Swastika to install unity”. The evidence exists for all to seeIn their rallies, the Nazis frequently used Hooked Cross in association with cross.In Nazi rally at berlin, the hooked cross can be easily noticed in association with the biblical cross on the flag.

5. During Nazi era, both the cross and hooked cross were very frequently intertwined and exchanged for one another.
Here is the official flag of German Christian movement. Notice the hooked cross signifying the second coming of Christ depicted in place of Jesus on the cross.

6. The meaning and interpretation of hooked cross and its association with Christianity will be explored further.Taking a brief detour  to Audrey’s thread. Here, she associates Nazism with Hindu revivalism and Savarkar again. She claims that  Savarkar’s swastika is actually Nazi.She claims that Hindu Nationalists intentionally displayed the angle of  Swastika midway between Nazi and Indian uses?But is that really so? This tweet completely exposes Audrey’s ignorance.Audrey claims that any Swastika depicted with a slanting angle is not Hindu Swastika but Nazi symbol.This betrays Audrey’s utter ignorance about the subject.Hindu Swastikas are often depicted with a slanting angle. It is very common to see slanting swastikas on Hindu temples.It is funny that Audrey associates Savarkar’s book Hindutva with Nazism.She would not have made such clueless & ignorant remarks had she read that book.Far from showing any anti-semitic Nazism, Savarkar actually expresses in that book his desire for a Jewish homeland in Israel.Like her protestant Indologist predecessors, Audrey  connects Hinduism with Nazism.Like them, Audrey also has links with Christian missionaries.Why should her personal religion be our problem? Well, but for the fact that they don’t keep it confined to their personal space! Ausrey’s father-in-law Nathan Rehn is a pastor belonging to a fundamentalist Christian organization “Win India for Christ”.Like Aurangzeb whom she admires, Audrey’s father in law is also an outspoken critic of “idol worship”. These protestant Indologists ignore that the Nazi Hooked Cross was conceived in a Christian context.Hitler’s  upbringing was at the Benedictine Christian Monastery in Austria which features hooked cross motifs.It was from a Christian milieu that they picked up “hooked cross”.While protestant Indologists continue to manufacture fake association between Hinduism and Nazism, German bishops have recently admitted their role.
“We were complicit in Nazi crimes”- German Bishops.While Bishops admitted their role in Nazi Crimes, they havent admitted their role in this false association of Hooked Cross with Swastika.It is interesting to note that the first English translation of Mein Kampf by Edgar Dugdale did not have “swastika”. Edgar Dugdale correctly translates “Haken Kreuz” as hooked cross.It was only the Christian Pastor Murphy who first used “Swastika” in place of “Haken Kreuz” in his (mis)translation of Mein Kampf.

Is There A Solution In Sight For Assam’s Demographic Crisis? An Analysis

by Ankita Dutta
Join the Conversation