Prime Minister Narendra Modi released the new flag of the Indian Navy on September 2 at the Cochin Shipyard. The opportunity was to induct the aircraft carrier INS Vikrant into the Navy. The new flag retains the tricolor in the top left, but the cross of St. George has been removed. This cross was on the flag since the British rule. Now in its place is the national emblem of India. Satyameva Jayate is written within a blue octagon. This sign is on the bottom right of the flag.

This octagon with a golden border is taken from the royal seal of Chhatrapati Shivaji Maharaj. Vaibhav Purandare, author of the book ‘Shivaji: India’s Great Warrior King’, says, ‘For the first time the Government of India has officially acknowledged that Chhatrapati Shivaji was the father of the Indian Navy. Shivaji played an important role in preparing the indigenous navy. They built this fleet when India was dominated by people from Britain, Portugal, France and the Netherlands.

Purandare says, ‘By the middle of the 13th century, the Chola dynasty was overthrown. This was followed by Islamic invasions and then the Mughal Empire and the sultanates in the south. During this time the Indian rulers had ignored the importance of the sea. In the Middle Ages, the influence of foreigners on the sea began to increase. The Portuguese came, the Dutch came, the British came, and then the French came. Shivaji was born in 1630. By then, the coastline of India was in some way controlled by foreigners. 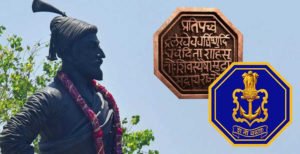 The situation was that if the family of Nizam Shah or Adil Shah of Ahmednagar or the family of the Mughal emperor had to go to Mecca or Medina, they had to take permission from these maritime forces so that their ships could move forward.

The same was the case in business. If goods were to be ordered from abroad or to be sent abroad from India, then the approval of these maritime powers had to be taken. Purandare says, “Shivaji soon realized how important the sea was in terms of defense and trade. He built his mighty Maratha navy. This work took place about seven centuries after the fall of the Chola dynasty. Hence Shivaji is considered as the Father of the Indian Navy. And this thing has now got official recognition for the first time.

When asked about Shivaji’s role in building the navy, Purandare said, “With the capture of some forts on the western side, he started building ships. In this way he took the step of building a naval fleet. The early ships were not very good as the Marathas did not have good knowledge of ship making. Such technology was with foreign powers like Britain and Portugal.

Purandare says, ‘Shivaji showed no hesitation in taking technology from the people of Britain and Portugal. He also took the help of some Portuguese in building the ship. He also got his people trained from him. The help of British engineers was also taken in this work. According to British factory records, British people from many places including Surat and Rajapur complained that many of their engineers had gone with Shivaji and started building his ships. 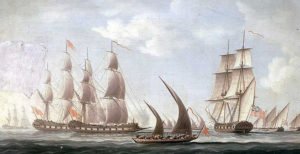 According to Purandare, ‘Shivaji’s early ships were not very good, but gradually they built bigger and better ships. Their large ships were known as Gurabs. They also built the Galbat and other ships, which were lighter and could move faster. Some of his ships were so good that they could be loaded with artillery. In a way, they also built ships to attack fast and also built ships keeping in mind the long stretch war.’

Apart from the British and the Portuguese, Shivaji also fought with the Siddis. The Siddis controlled the port of Janjira on the west coast. This port was occupied for a long time by the Siddis of Africa and Abyssinia.

Purandare says, ‘Shivaji also knew that the fort of Janjira was very important due to being in the middle of the Konkan coast, so he attacked Janjira one after the other. The British and the Portuguese were helping the Siddis. So the Siddis forced the Marathas to retreat. But Shivaji’s attacks had warned of danger to all the forces on the beach.’

In the midst of all this, in 15 years, Shivaji had built more than 50 ships and warships. His naval activities had begun by 1658, when he was only 28 years old. By the time he assumed the title of Chhatrapati in 1674, he had more than 50 warships.’ Purandare says, ‘If merchant ships are also counted along with these warships, then in 1674 Shivaji had 700 ships. That is, in a decade and a half, he had prepared a large naval fleet. 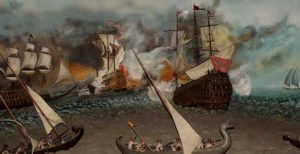 The question is, who were the great warriors of this navy of Shivaji, who were the soldiers? Purandare explains, “There were people from the Koli community mainly living on the Konkan coast. Among the fishermen of the west coast were the Bhandari community. Many Muslims were also in his navy. Daulat Khan and Darya Sarang were the two top officers of his navy. Both of them were Muslims.

The foreign powers and the Mughals were alarmed by this sea power of Shivaji. Purandare says, ‘Initially, the British people felt that Shivaji’s ships were not good, so his navy was nothing special. But gradually they also started realizing the power of Shivaji. The Mughals also felt the same as Shivaji was continuously attacking Surat. At that time Goa was occupied by the Portuguese. They also became alert as they were getting reports that Shivaji could attack Goa at any time.

‘But while the Portuguese were preparing for the threat of Shivaji’s attack, Shivaji made another move to surprise the enemies. It happened that Shivaji boarded a ship and went ahead. Everyone thought that his army was out to attack Goa. But Shivaji bypassed Goa and reached Karwar. The rulers of Karwar were stunned. In this way, from the British and the Portuguese to the Mughals, everyone was alarmed by Shivaji’s growing power. Shivaji had strengthened his navy in a very thoughtful way.